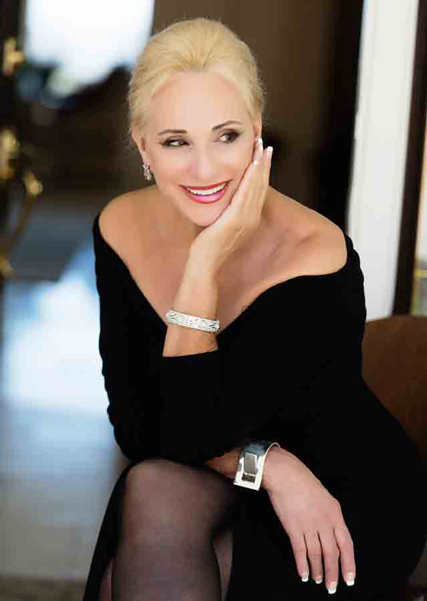 This review was originally published in The Absolute Sound Magazine.
Click here to read the entire interview.

In the middle of Saturday afternoon at AXPONA 2016 in Chicago, I witnessed what is surely the most demanding test of an audio system there can be—an A/B showdown with The Real Thing. A crowd of around 50 gathered in front of a pricey system
in the Legacy loudspeaker room— several systems, actually—to listen to the playback of recordings featuring a sultry-voiced alto singing popular songs from the mid-20th century, supported on disc by elegantly idiomatic small group jazz arrangements. What made the demonstration unusual was that the artist in question, Lyn Stanley, was standing between the speakers, occasionally singing along with her recorded self. Talk about “the absolute sound” as a benchmark: You can run but you can’t hide.

Stanley has become a fixture at audio shows, in the U.S. and abroad, and has done this kind of demonstration many times. Always a striking presence—she’s a professional ballroom dancer as well as a chanteuse and looks the part, which tends to make her stand out in a crowd of sartorially-challenged audiophiles— Stanley cogently explains to her rapt audience what they should be listening for, musically and sonically. Over the past several years, Stanley has recorded and released three exceptional albums, Lost in Romance (2013), Potions [from the 50’s] (2014), and Interludes (2015). All three are available as hybrid stereo SACDs, on vinyl, and most recently as highresolution downloads from Stanley’s new website, simplythebestdownloads.com. The next two planned projects are a collection of ballads that will honor tenor saxophone great Stanley Turrentine and a big band album that focuses on dance music associated with Fred Astaire, Ginger Rogers, and Gene Kelly.

Just as notable as the musical and sonic merits of Stanley’s work is her take-charge approach to the creative process that eventuates in a recording. She takes responsibility for every aspect of that process, including hiring the best collaborating musicians and recording professionals—people like recording/mixing engineer Al Schmitt and mastering guru Bernie Grundman. With Interludes, Stanley has also taken on the role of producer, and it’s no mere honorific in this instance.

In person, Lyn Stanley is affable and articulate. To allow the singer to fully expand on her ideas regarding recorded performance and sound, I submitted to her some written queries that she addressed over several weeks; her responses are excerpted here.