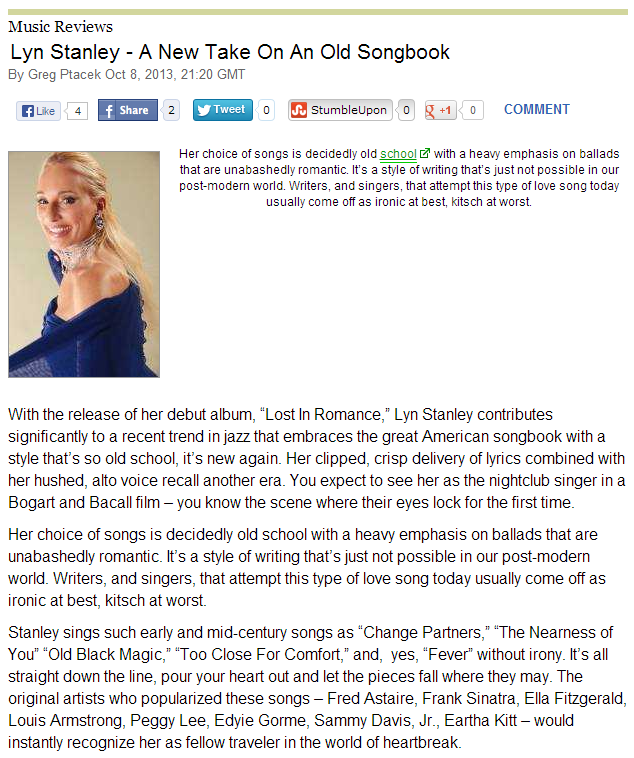 The following is from music critic Greg Ptacek of Monsters & Critics. Click here to read the full article online >>

With the release of her debut album, “Lost In Romance,” Lyn Stanley contributes significantly to a recent trend in jazz that embraces the great American songbook with a style that’s so old school, it’s new again. Her clipped, crisp delivery of lyrics combined with her hushed, alto voice recall another era. You expect to see her as the nightclub singer in a Bogart and Bacall film – you know the scene where their eyes lock for the first time.

Stanley sings such early and mid-century songs as “Change Partners,” “The Nearness of You” “Old Black Magic,” “Too Close For Comfort,” and,  yes, “Fever” without irony. It’s all straight down the line, pour your heart out and let the pieces fall where they may. The original artists who popularized these songs – Fred Astaire, Frank Sinatra, Ella Fitzgerald, Louis Armstrong, Peggy Lee, Edyie Gorme, Sammy Davis, Jr., Eartha Kitt – would instantly recognize her as fellow traveler in the world of heartbreak.