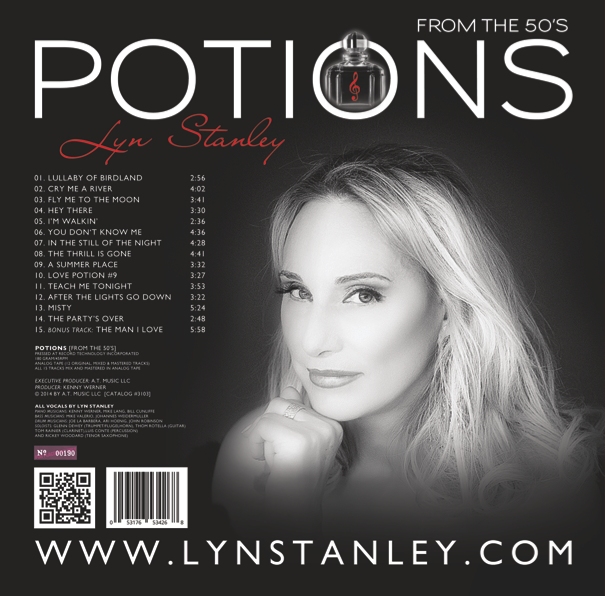 The award-winning singer Lyn Stanley and an all-star jazz group (tenor-saxophonist Bob Sheppard, pianist Mike Lang, bassist Mike Valerio and drummer Joe La Barbera) will be celebrating the release of her new recording Potions [from the 50s] at Upstairs At Vitello’s on Saturday Nov. 8. The colorful show will be paying tribute to the jazz standards and pop songs of the great composers of the 1950s. In addition to the memorable performances, veteran songwriter and arranger Artie Butler will be making a special appearance, discussing the music of the era.

Lyn Stanley’s radiant vocal artistry combines her flawless intonation and warmth with a full-bodied resonance throughout her extensive range. She interprets superior lyrics with grace, sensuality and a deep understanding of their meaning. Potions [from the 50s] has Ms. Stanley’s personal interpretations of such gems of the era as “Lullaby Of Birdland,” “Misty,” “Cry Me A River,” “Love Potion #9,” “Teach Me Tonight” and “After The Lights Go Down Low.” Produced by the great pianist Kenny Werner, this release features Lyn Stanley at her most expressive and is the latest accomplishment in her remarkable and inspiring life.

In 2010, Lyn met the brilliant veteran pianist Paul Smith and his wife, vocal coach Annette Warren. Having never sung professionally before, Lyn auditioned for lessons, wanting to find out if she could sing. After Lyn performed “The Man I Love,” Annette’s comment was “You don’t know if you can sing?” The couple became her mentors. Four months later Lyn first sang in public and one success after another has followed ever since.

Lyn Stanley’s recording debut, Lost In Romance, made her an immediate international star. She sold over 7,000 albums worldwide in various formats, a phenomenal amount for a newcomer with no label. The #1 selling album on DownloadsNOW.net, Lost In Romance ranked in the top 100 albums played by radio stations across the United States. Audio reviewer and columnist Michael Fremer from Analogplanet.com gave Lost In Romance an 11/11 score for sonics, said that it was a “must” for audiophile collectors, and called Lyn the “Chanteuse Extraordinaire.” Chinese reviewer Jack Liu in his book All About Vinyl named Lost In Romance as #6 in his top 100 list of all-time albums that every vinyl collector must have.

Lyn’s new recording, Potions [from the 50s], celebrates the top composers and songs of the era with inspired versions of timeless melodies ranging from jazz, popular hits and blues to country, r&b and doo-wop.. The performances were recorded on analog tape just like the Lps of the 1950s. Potions [from the 50s] is being released not only as a SACD stereo hybrid (which plays on Blu Ray and CD players) and as downloads on CDBaby.com but as a 180 gram double-45 RPM vinyl album, a reel-to-reel tape and a vinyl record for audiophiles.

Lyn Stanley is becoming well known for her colorful and very entertaining shows, which generally sell out. Her gentle and beautiful voice is both youthful and mature, and she effortlessly connects with audiences. She puts swing, humanity and beauty into every word that she interprets

For more information about Lyn Stanley, her upcoming show and Potions [from the 50s] go to Lyn’s website (www.lynstanley.com) or send an E-mail to info@lynstanley.com