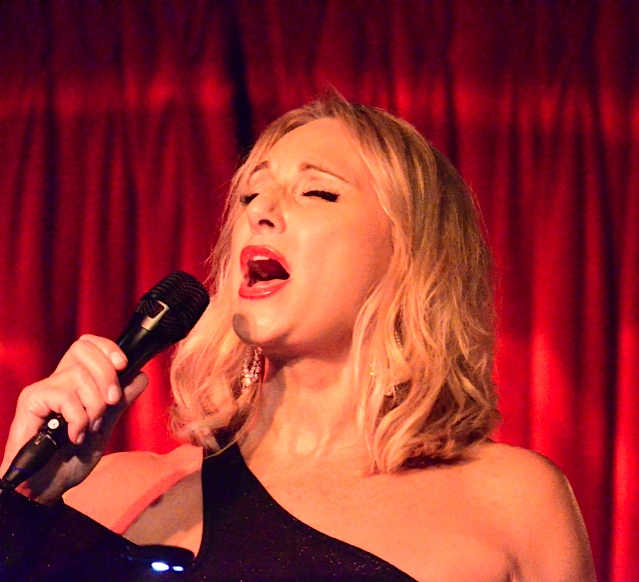 GH: We get a lot of first-time albums with new artists, some of them pretty promising, but once in a blue moon you get the perfect package. Great singer, great arrangements, great tunes – and that’s what it is with Lyn Stanley and her debut CD, LOST IN ROMANCE. Give a listen:

[TOO CLOSE FOR COMFORT plays]

GH: That’s just plain “Wow, wow, wow!” How brave you are to undertake these tunes. Almost all of them have been sung by the great singers of the American songbook. That’s an Eydie Gormé song of course.

LS: Of course, and I had Llew Matthews do the arrangement on it, and I think he did a wonderful job.

GH: Oh it’s terrific. Terrific. But then most of the cuts in the CD are as good as that. I just happen to love that song so I picked it.

GH: Not only that, but we get a lot of CDs these days where literally, it’s a one-song push, and on yours, you could pick any one of the 14-15 songs and you’ve got a listenable cut. I sat and listened to the whole thing twice and it was an evening – an evening with Lyn Stanley!

LS: Thank you. The minute I finished the mixes with Al Schmitt, I drove a test disc down to Paul Smith and he grabbed it from my arms, and he walked it into his stereo room and sat down and told me to hush for an hour. And he just loved it, he played it for the entire hour and smiled, and when it was all done he stood up and he came over and hugged me. He said, “I give you an A++, it’s wonderful.”

GH: Paul Smith has been your mentor, I take it.

LS: Paul Smith, again… my whole career. If it hadn’t been for Paul and his wife Annette, I would not be talking to you today on this topic.

GH: How many awards did you win as a ballroom dancer?

LS: Well I had a fast career with a goal in mind, and I suffered in incredible injury in the middle of that progression of training. I was in a terrible car accident and I lost my ability to walk. So I learned, through the Rumba, how to walk again. But I had already started the career. And as I got better, I continued training, and in a very short period of time – including the injury – in six years, I was able to, in 2010, win three national titles in Orlando.

GH: What a comeback story!

LS: Yes, and then I also won third place an event in a “Worlds” competition. So I was very pleased with coming back as well as I did. But it took a lot of fortitude, I will say that.

GH: Had you thought of pursuing a career as a singer before this happened?

LS: I loved to sing as a child, but my mother was very cautious about anything to do with show business. And she instructed me early on as a child to go corporate! [Laughs]

LS: I ended up getting quite a few degrees and going corporate. I worked as an executive at a Fortune 500…

GH: Wouldn’t you rather sing?

LS: Oh, I always wanted to sing. There was no doubt about it. But I didn’t know I had a talent. The first time I ever heard myself sing was inside churches, or in the shower, and of course in the churches, I never knew that my low voice was so good because you don’t sing low, generally, in that setting.

GH: No you don’t. Hallelujah!

GH: You remind me – not vocally, not the way you sound – of a singer from that era name Jo Stafford. Are you familiar with Jo Stafford?

GH: She came out of the big band era from Tommy Dorsey and she recorded for years. And the thing about her was that she could sing anything, and she had perfect pitch. She sang ballads, she sang jazz, she sang swing – and that’s a feeling I have about you after this CD, because you tackle every possible type of song.

LS: Well, I liked music early on. My mother introduced me as a child because she always loved a dance, but she introduced me through her purchases to Judy Garland and Frank Sinatra albums. I bought a couple Barbra Streisand on my own, and tried to mimic those days. I tried to mimic singers to see if I could get those varying levels of octaves. And now that I’m working actually with vocal coaches, I’m realizing that I do have a really high range, as well as very low one, and of course if you do, it’s the middle mixing that you’ve got to work on… which I’ve done pretty well on with the past couple of years of training that I’ve had.

GH: LOST IN ROMANCE is the name of the CD, she has CHANGE PARTNERS, WATCH WHAT HAPPENS, FEVER, THAT OLD BLACK MAGIC, THE NEARNESS OF YOU (a great favorite of mine), YOU GO TO MY HEAD, MY FOOLISH HEART, LOSING MY MIND (which is a very challenging song), ONE FOR MY BABY, TOO CLOSE FOR COMFORT (which we played), SOMETHING (you’ve even got a Beatles tune in there), and THE LAST DANCE. All on one package and it’s available now. It’s a beautiful CD – who mounted this package for you?

LS: I hired a woman from the ballroom dance world. I am putting the CD out both in another remixing for the ballroom dance world. And I made a contact with another gentleman who was a musical producer with SO YOU THINK YOU CAN DANCE, and now he does a lot of the music at dance competitions, and so I asked him who he would suggest to do the graphics. And he had contacted a woman by the name of Katie Mecham, and she has been remarkably wonderful for me to work with. I had in my head exactly what I wanted, and she did it to a T with flair.

LS: Well I actually have three piano players on the album. I’ve got Tamir Hendelman, who currently is first call with Barbra Streisand. I have Llew Matthews, who you liked the arrangement on TOO CLOSE FOR COMFORT. He worked with Nancy Wilson for 25 years as her arranger. And I have Mike Lang, who is a big famous studio musician in jazz.

GH: Wow – I was going to say, if you’ve got one that sounds that good, and he’s single – marry him!

GH: I always ask my guest, if you’re an artist, to choose the song that you’d like us to play to close off our interview. Which cut would you like us to play?

LS: Well, I’ve heard people tell me that Tamir Hendelman and Steve Rawlins’ arrangement of WATCH WHAT HAPPENS is “flawless,” as some people have said, if you like that. FEVER, however, is kind of a new take on the song. I worked on the arrangement for that – I am credited with helping with that particular arrangement. Jim De Julio and I worked out a new bass line.

GH: Let’s do FEVER, because everybody knows the Peggy Lee arrangement, so let’s hear what Lyn Stanley does with it on LOST IN ROMANCE. Thank you for finding time to visit me on Niteside. I hope I get to know you much better.

LS: Thank you so much for the time, Gregg. I really appreciate you having me on.