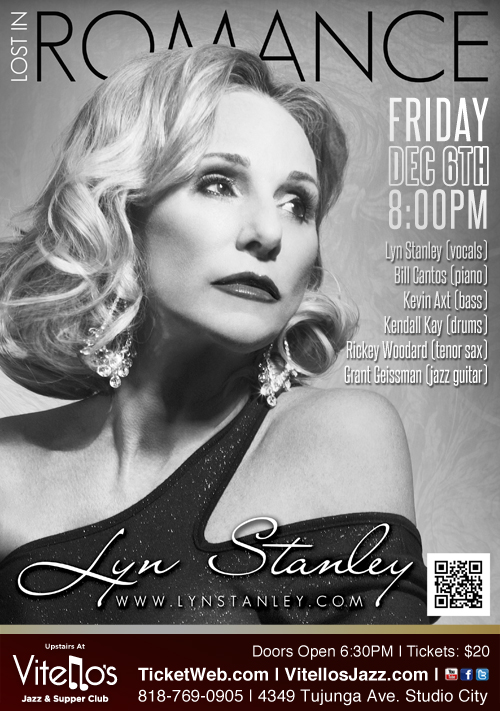 Lyn Stanley was born in Tacoma, Washington, into a musical family. Her father followed in the footsteps of Errol Garner, playing jazz-styled piano by ear. Her paternal grandfather was an opera singer in his native Bulgaria. And her mother’s brother, of Irish decent, sang tenor roles in local theater groups in Long Beach, CA. Lyn grew up in California, moved to Orlando, Florida briefly to complete her undergraduate degree, moved back to California for a master’s degree, and then to East Lansing, Michigan where she worked on a PhD in Mass Media. Despite her many academic achievements, her attraction to music and dancing always simmered at the heart of her creative ambitions.

In 2006 Lyn returned to California to care for her then-ailing mother, while pursuing her goal to become a national amateur ballroom dance champion. And she achieved her goal, becoming a Pro/AM champion in ballroom dancing’s International Standard style and winning three dance events and two national titles in 2010.

But her singing career was a natural extension of the musical embrace that was an essential aspect of her dancing. Her performance break through as a singer began in 2010, when she was heard by pianist Paul Smith. One of the music world’s most honored jazz artists, and the favored accompanist of Ella Fitzgerald, Anita O’Day, Sammy Davis Jr. and Mel Torme, Smith saw in Lyn’s singing the emerging talents of another singer with the potential for great expectations.

Following her stage debut on February 13, 2011, accompanied by pianist/arranger Smith, Lyn was accepted into a singer training program at Yale University, where she studied with a stellar array of some of the music world’s best known performers. Her first show, “Makin’ Whoopee,” came together at Yale. Later, in performances at Sterlings, Upstairs at Vitello’s in Studio City, and the Joslyn Center of Performing Arts in Palm Desert, California, she was well-received by audiences and critics, generating a call for an album from her growing legions of fans.

In 2013, Lyn released her debut album, Lost in Romance working with four different rhythm section trios, and arrangements by Tamir Hendelman, Steve Rawlins and Llew Matthews. In addition to her warm tone, rhythmic swing and expressive vocals in a program of great standard tunes, she also added another fascinating aspect to the mix. As a dancer, well aware of the long historical linkage between jazz and dance rhythms, she approached Lost In Romance eager to underscore that rich musical connection in ways that illuminate each of the compelling tracks.

Since its release, Lost In Romance has received critical acclaim and international and national airplay. Deejays have been receiving enthusiastic responses from audiences who are “thrilled” with the tracks. KKJZ radio, the second largest jazz radio station in the US, picked seven tracks from the album for airplay – a rare accomplishment for a new album. Bubba Jackson, KKJZ radio personality, was equally avid about Lyn’s work. “Thanks for bringing the songstress back to jazz,” he told her. “You make the lyrics come alive as the original composers intended.” Jazz historian Scott Yanow described her as “a superior singer.” And Don Grigware, of Broadway World, added his belief that Lost In Romance is “..one of the greatest tributes to the great age of jazz I have ever heard.”Lyn Stanley’s close friend and musical mentor, Paul Smith, was delighted with Lost In Romance, rating it as an A++. Before he passed away in June, 2013, he noted that he “hoped to be around for her 10th album.” And, as Lyn continues on her creative pathway, Smith’s memorable support urges her along her sky’s-the-limit musical journey.