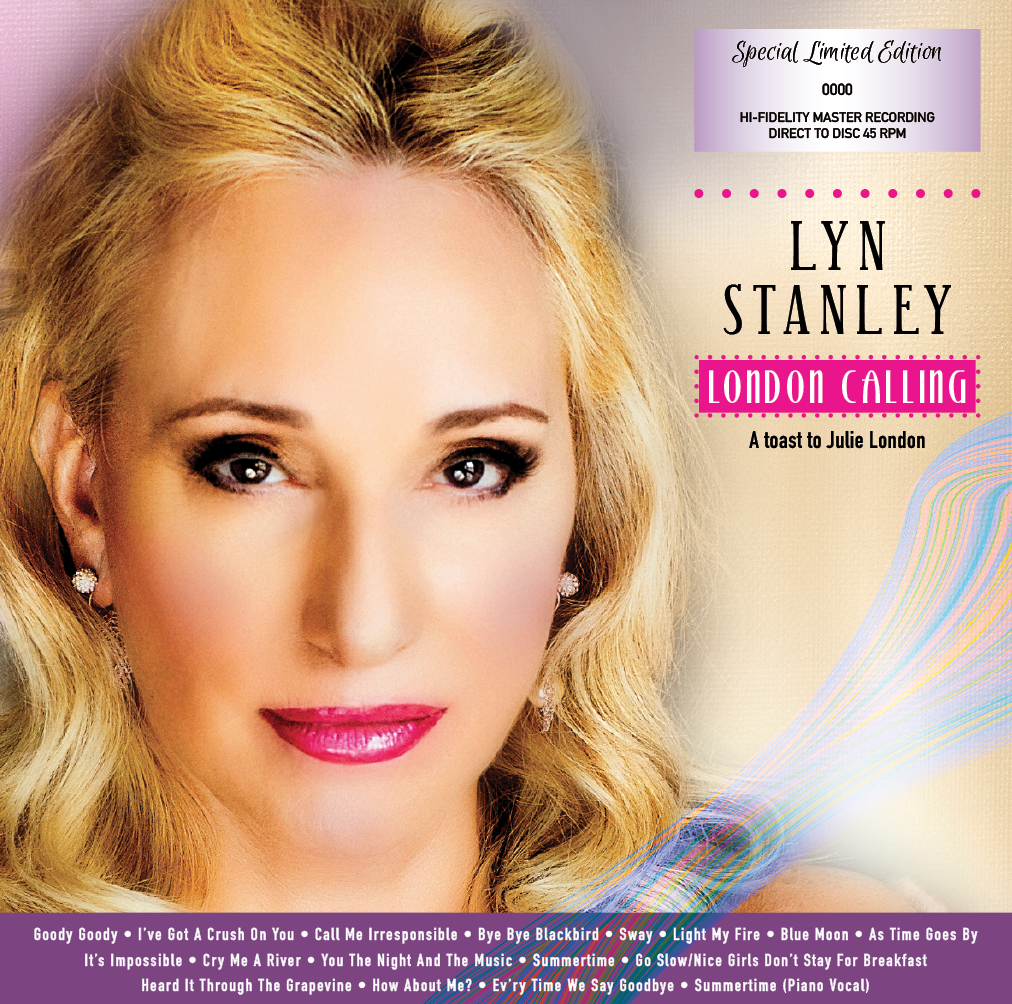 Los Angeles, CA: When sultry singer Lyn Stanley aims her attention on a topic, you can count on her to jump in with both elegantly clad feet. She immerses herself in research till she’s satisfied she can more than hold her own on the subject. These days, the Southern California-based jazz vocalist has her laser focus on another SoCal chanteuse, Julie London, a frequent presence on radio airwaves in the 1950s and ’60s with hits like “Cry Me a River.”

The upcoming Julie London-inspired project is the sixth release for vocalist Lyn Stanley, who was discovered in 2011 by the iconic pianist Paul Smith, a studio giant who was Ella Fitzgerald’s musical director and frequent collaborator over several decades. Lyn put out her first album in 2013, and since then has released four others to critical and popular acclaim. Her 2017 dual release, The Moonlight Sessions, Volume One andVolume Two, reaped glowing reviews and stellar sales—earning more than $200,000, a rare figure in the tiny independently produced jazz market. (Jazz overall accounted for only 1.2 percent of total music album consumption in 2017, according to Statista.com.)

In preparation for the upcoming sessions, Stanley is studying London’s timing, phrasing, musical preferences, and song selections. She’s also taking vocal training to forge greater understanding of London’s style. Lyn points out, “For delivery, it’s going to be my stuff, my way. But I want to understand her breathiness and laid back vocal technique.  We both are known for our sensual delivery but the technique differs.”

A long-time Julie London fan, Lyn recalls: “I unknowingly had her songs in my repertoire, and when my first album came out and critics compared me to her, it was a pleasant surprise.” Julie London recorded dozens of albums and sold millions of singles; besides her vocal ventures, she also enjoyed a successful 50-year movie and television career that included the TV show Emergency! But despite her success as a vocalist, Julie primarily considered herself an actress rather than a singer.

For Lyn Stanley, understanding that mind-set is key to grasping London’s way with a song: “Julie London described herself an actor, not singer, and had to get in character as a way to decide how the music should be delivered,” Lyn notes.  A project video link is here:  https://youtu.be/Zx4kwNOtDxs

While both Lyn Stanley and Julie London could be described as sultry and sophisticated singers, the upcoming session will be an appreciation, not an imitation. This album will offer new tunes not yet recorded that are London covers. To date, the exact song lineup for the album hasn’t been set in stone, but in addition to the likes of “Body and Soul” listeners will be treated to timeless tunes covered by London such as sultry and swinging versions of “What Is This Thing Called Love?,” “Girl Talk,” and “Route 66’.” Some of the song selections will be in London’s song keys in keeping with a tribute.

In addition to acclaim for her velvety alto, choice of material, and her unique and personal approach to songs, Stanley’s attention to detail in the studio has garnered raves.

Lyn can be counted on to surround herself in the studio with the crème de la crème of musicians. For this venture, she’s aiming for the intimate sound of piano, bass, drums, and guitar and percussion. This time Lyn is teaming up with pianist, Mike Lang, who was an acompanist on her debut album Lost In Romance (including her popular version of Fever) and also played in her Potions [from the 50s] album. Chuck Berghofer (bass), John Chiodini (guitar), Aaron Serfaty (drums and percussion) and Luis Conte (percussionist).

Always the perfectionist, Lyn looks forward to recording some of the tunes direct-to-disc; not only does she appreciate the sound the process yields, she also enjoys the challenge.  “We’ll have great engineering it but our performance is critical. You have to be into the musical moment as there will only be chord change charts-no set arrangements. The pressure is on all of us to create our best performances. But, it’s a great format if we execute it well.”

Stay tuned for more details on this exciting project. Who knows, this could be the start of a great new series of tribute albums from the ever-creative Lyn Stanley.

“Lyn–I have seen you evolve from a very good vocalist to now among the MOST OUTSTANDING. You get top billing on KKJZ. The new album…is marvelous!!” –Saul Levine, Mt. Wilson Broadcasting Inc.

–Saul Levine, KKJZ, proclaims The Moonlight Sessions Volume Two“One of the best albums of the century!”
FOR MORE INFORMATION:  Assistant@lynstanley.com