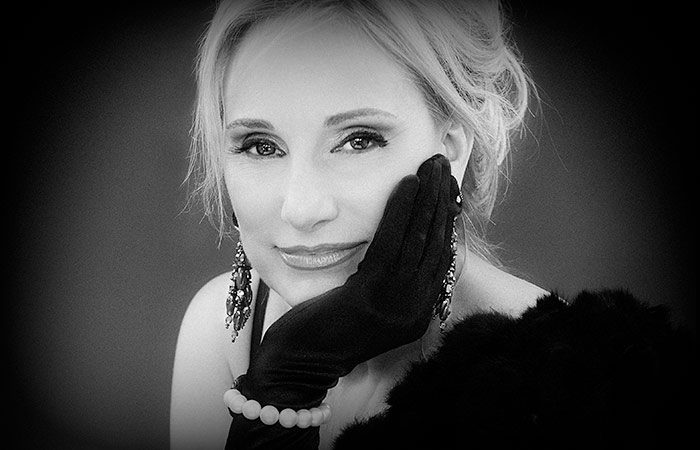 Hollywood, CA.  A celebration of the release of a new CD is a fairly common event at music clubs around town. It is, after all, the chance to attract a presumably supportive roomful of fans and friends. Followed by the opportunity to have the new CD signed personally by the artist.

Singer Lyn Stanley’s appearance at Catalina Bar & Grill Tuesdy night was publicized as just such a CD release party for her new album, Lost in Romance.

As it turned out, it was all that and more.

The program, which was emceed by the inimitible wit and wisdom of KJAZ radio personality Bubba Jackson, actually consisted of three distinct segments.

The first belonged completely to Stanley and her musicians, as she offered a virtual banquet of songs from the new CD. As a former competitive ballroom dancer, her program reflected the dance aspects that continue to play a prominent role in her music career, as well. And it was no surprise that both the CD and her live performance began with the Irving Berlin song “Change Partners” and wound up with Sammy Cahn and Jimmy Van Heusen’s “The Last Dance.” But that was just the beginning of a string of songs from the CD’s program of far-ranging selections from the Great American songbook. Among the numerous appealing album selections explored by Stanley were “Fever,” “The Nearness of You,” “That Old Black Magic,” “I Just Want To Make Love To You” and the whimsical “What Am I Gonna Do With A Bad Boy Like You,” all sung with the enthusiasm of a vocalist eager to establish her own musical identity.

That’s as prime a line-up of accompanying musicians as any singer could hope to have. And to Stanley’s credit, she made the most of their melodically supportive, rhythmically swinging back-up. The program’s second segment further underscored her continuing involvement with ballroom dancing. At one side of the stage, a small area was set aside as a dance stage.

And, for several fascinating interactive songs, Stanley’s singing and her musicians’ playing provided the perfect accompaniment for dance numbers by the Russian duo of Latin dance world champions Maria Nikolishina and Nikolai Vononovich.

Both of the dancers were remarkably attractive, moving with the the grace of ballet artistry and the ease of superb athletes. Interacting with Stanley’s vocals, the combination recalled the inextricable and compelling linkages that have always existed between dance and music.

The final segment of the program was a tribute to the late pianist Paul Smith and his wife, singer and teacher Annette Warren Smith, both of whom were deeply supportive of Stanley’s nascent career as it began to blossom. Mixing a few of Stanley’s vocal versions of tunes favored by Smith with several instrumentals recalling Smith’s long history as a much favored, prominent Los Angeles pianist, the segment provided yet another overview of Stanley’s transformative vocal career.

Full disclosure: I wrote the liner notes for Lyn Stanley’s Lost In Romance before I heard heard her perform live. But her abilities were nonetheless fully apparent on the album – and completely confirmed by this memorable appearance at Catalina’s.