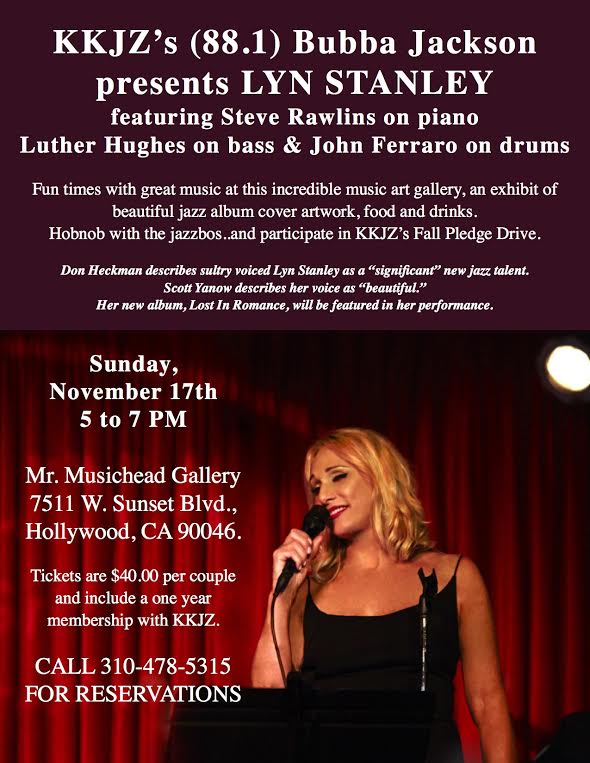 “Thank you for bringing the Song-tress back to jazz.  Your voice brings life to lyrics that defined the American Songbook.” – Bubba Jackson, KKJZ 88.1FM

Los Angeles, CA- Critically-acclaimed debut  Jazz Vocalist Lyn Stanley will be performing with her trio at the Mr. Musichead Gallery in Los Angeles on Sunday, November 17th, from 5-7pm.  Stanley’s performance will accompany “All Or Nothing At All,” an exhibit of famed artist David Stone Martin’s vintage album art for which he illustrated covers for Jazz artists including Billie Holiday, Charlie Parker, Dizzy Gillespie, Stan Getz, Lionel Hampton and more.  Covers 1946 – 1959

Lost In Romance, the critically-acclaimed debut album by singer Lyn Stanley featuring  13 of  jazz’s finest musicians, will be featured prominently as part of Los Angeles radio station KKJZ 88.1 FM’s annual Fall fundraising efforts in November.  In tandem with this year’s pledge drive, Stanley and her trio –consisting of Steve Rawlins on piano, Luther Hughes on bass and John Ferraro on drums—will be performing at the Mr. Musichead Gallery on November 17th as part of a fundraiser for KKJZ 88.1 FM.   Stanley’s CD  is a favorite of KKJZ 88.1 FM DJ Bubba Jackson who recently hosted Stanley’s release party at Catalina’s in Los Angeles, and who will be joining her once again at the Gallery on the 17th.  A Q&A will follow the performance, and wine and cheese will be served.

The event also celebrates what would have been Martin’s 100th birthday as well as the release of the JazzArtz Fine Arts Editions from the catalog “The Jazz Album Covers 1946-1959.”  A pledge of $40 or more provides for two tickets to this exclusive event at the Gallery, as well as a one-year KKJZ 88.1 FM membership.  Tickets are available online at www.jazzandblues.org or by calling 310-478-5061.

Lost In Romance  was released August 20th to widespread critical acclaim and airplay both across the country and internationally.  A passionate ode to the music and romance of another era, Lost In Romance is also a tribute to not only the Great American Songbook, but  Stanley’s friend and mentor, the late legendary world-class jazz pianist Paul Smith, whom she credits with launching her career as a singer.

Opened in 1998 by owner and founder Sam Milgrom, Mr. Musichead Gallery showcases collections of art and photography by and about the world’s leading Rock, Blues, Jazz and Hip Hop musicians.  The Gallery is devoted to featuring a large and unique collection of fine art, photography, album cover art and poster art that chronicles American Music’s rich heritage.