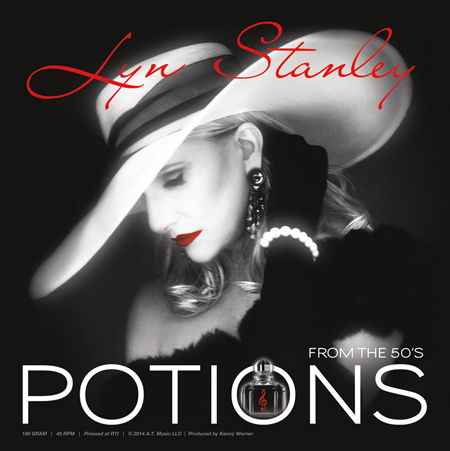 From the full article:

Overall though, Lost In Romance successfully achieved its objectives, presenting Lyn Stanley to a well-targeted international audiophile audience appreciative of both good material well-sung and the highest caliber sonics. The album was musical and sonic comfort food for an audience hungry for it and considering that Ms. Stanley was unknown not that long ago and is now well-known within the audiophile community and has sold to an appreciative audience around 10,000 vinyl copies of a fairly expensive double 45rpm package, that easily qualifies on all fronts as “mission accomplished”.

For her all-important follow-up Ms. Stanley doesn’t stray all that far from her original game plan though the album’s concept is in far better focus. Potions collects fourteen songs, mostly from the non-rock side of the 1950s (plus one LP bonus track from a different decade dedicated to her mentor Paul T. Smith who passed away in June of 2013). Smith was an accompanist for Ella Fitzgerald, Anita O’Day, Mel Tormé and many other jazz vocal greats and he was also the musical director for “The Steve Allen Comedy Hour” (‘smock! smock!).

The album opens with a “sassy” cha cha version of the familiar “Lullaby of Birdland”, which is really atypical of the rest of the album. Most of the album is cooler and more swinging. But here’s the thing: Ms. Stanley’s vocalizing has taken flight compared to the last album. Her phrasing is far more assured and less pedestrian. She glides and soars with an ease and control only occasionally heard on the debut, taking unexpected turns and abrupt volume shifts. She lingers longer and moves from phrase to phrase more gracefully and with greater rhythmic and intonation agility . The occasional “moments of karaoke” that marred the debut are missing in action here. She’s far more at ease.

It took guts to cover “Cry Me a River” and “Misty” among other classics long associated with one particular artist like Julie London is with “Cry Me a River.” Ms. Stanley truly makes them her own on this album…